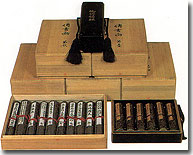 The basic practice for Nichiren's followers is the constant recitation of the Daimoku, "Na-mu-myo-ho-ren-ge-kyo"(which means that one puts his faith in the Lotus sutra).

Besides reciting the Daimoku inside of their halls, Hokke-so, priests who observe the Lotus sutra, also proselytize amongst the people, convincing them to become followers of this sutra, and spread it outside of the temple. In addition, some of them undergo such austere practices as hiking on set courses through steep mountains and bathing in cold fresh water at waterfalls to increase their power when praying. During the Edo period (1603-1867), sub-denominations of the Hokke-shugen, practitioners who led an ascetic life using the Lotus sutra for prayers, developed in several Nichiren denominations.

Reverend Nichikyu (1662-1727), the third abbot of shochuzan Onju-in temple, completed one thousand days of austerities during the Genroku period (1688-1704), and he established rules for one hundred days of harsh austerities (aragyo). He compiled the "The sacred book on the transmission of prayers" (Kito-soden-sho) and thereby became the founder of the Onju-in denomination. 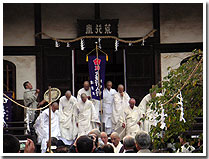 A special characteristic of the Onji-in denomination is the determination of boundaries within which austerities will be performed; these are called the "Aragyo-do(Hall of Austerities)." The practitioner must remain within these boundaries as he performs his austerities. The courses of austerities (aragyo) held in several places today by the Nichiren sect are believed to have been established after the Second World War; almost all of them follow the rules of the Onju-in denomination. 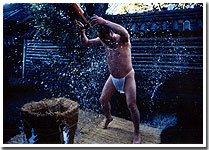 The practitioner shaves his head and wears a flax robe called "shojo-e"(purified robe); this robe is usually used for a monk's funeral. Once he passes through an auspicious entrance gate called the "Zuimon" on November 1 , he will be required to live apart from the secular world until February 10 of the following year. His daily activities follow a strict schedule. Everyday between 3 a.m. and 11 p.m., he must perfom "suigyo"(water austerities) a total of seven times. Suigyo consists of purifying oneself with fresh cold water. During the rest of the time he enters into state of reciting the sutra while sitting in a special reciting shrine where the guardian deity "Kishimojin"is installed. He is allowed to eat twice a day with meals consisting of gruel (with only 5 percent polishesd rice) and miso-soup. He must abstain from eating meat. He is permitted to sleep for just three hours each night. An ordinary man could not endure such austerities, but the practitioner must simply concentrate on reciting the Lotus sutra and pouring fresh cold water over his body every day. Undergoing these austerities, he improves his physical constitution. His voice, senses and spirit are strengthened through his practice.

The ritual instrument used in prayer is called the "bokken" or "yoji", therefore this kind of prayer is named as "boken-kaji" or "yoji-kaji". This ritual instrument resembling a wooden sword is used in the several prayers performed not only by the Nichiren sect, but also by groups of mountain ascetics and Shinto sects. Bokken has a special significance in the prayer, because the power of the practitioner flows out from it. Therefore it is most frequently used in prayer. 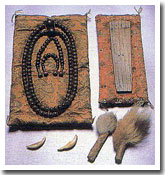 In the Onju-in denomination, the twenty-third chief abbot of Onju-in temple determined the transmission of the "seven types of bokken " during the Kaei period (1848-1854). Each bokken is used for its own purpose; for example, one kind of bokken is used for cases of a certain spiritual possession. In particular, a six-inch size bokken is normally used and is said to be especially powerful.

Selected words are written like a Mandala on the bokKen. For the practitioner, the bokken is not only an instrument for prayer but also a dharma-sword that protects the practitioner and defeats evil enemies. It is same as a sharp sword of a bodhisattva who helps sentient beings. It is even said to be same as the very life of the practitioner.

From the early through the middle Edo period, the bokken was made of the wood of the sumac tree (nurude). It has also been called the tree that is victorious over armies (shogun-boku). From the late Edo period, a holly tree (hiiragi) was used. Today, the wood of the jujube tree (natsume) is also used. The practitioner prays by striking a rosary on the surface of bokken and reciting special nine-character sentences called the "kuji-yomon"(nine-character essential phrase) or the "kito-kanmon"(essential elements of prayer). These are passages adopted from the Lotus sutra. Raising his hand in what is regarded as the kuji(nine-character) position, the practitioner performs a prayer. 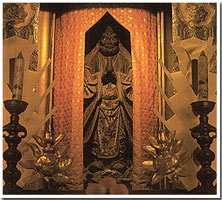 A variety of procedures for praying with the bokken exists. For example, the "shirabe-kaji"is a prayer to exorcize and admonish an evil spirit; the practitioner presses down on key points and rubs the body of the person who has been possessed to exorcize the evil spirit or energy. In ordinary prayer, the practitioner strikes the rosary with the surface of the bokken, making dramatic sounds as he performs prayers.

Prayer can be divided into two general categories. The first is for communal purposes, such as maintaining a peaceful world or pacifying a realm. The second is for personal purposes, such as removing evil energies, curing diseases, or consecrating newly made Buddhist images. In every prayer, the practitioner must be inspired by Kishimo-jin's spiritual power; this is possible only when one has faith in Kishimo-jin. With the help of a mind of great empathy and compassion, the deities and Buddha respond and the prayer is successful. Therefore the practitioner should not allow his mind to be even slightly tainted by selfish or wicked thoughts.

The horaku-kaji is a ceremonial service prayer in which everyone practicing austerities during the year joins together. During it, the bokken-kaji, prayers using the wooden sword, is performed. The prayers are for a perfect state of health and for good fortune of all religious -minded men and women. The powerful voice reciting the Lotus sutra and the force of a bokken-prayer that are the fruit of austerities impress the people and make them feel that they will have immeasurably good fortune. Prayers by practitioners who have undergone austerities (aragyo-so) are the most inspiring and vibrant performed by followers of the Lotus sutra. They arise through the unification and harmony of the three types of action (physical, oral, and mental).